Problems with moles or gophers? I have indoor cats and I use litter that is made from newspaper. I take a scoopful of urine soaked cat litter and put it down the hole. This does not kill them, just sends them elsewhere. Works for me, but I’m a pretty small sample.

Check out the Gopher Guy’s pictures to distinguish the difference between gophers and moles. Gophers are the ones eating your plants.

Below is a humorous story I wrote about my experience. Good luck with your yard.

When we moved from Petaluma with its thick adobe soil to Sebastopol with its sandy loam, I dreamt of a scrumptious abundant garden. I envisioned home grown carrots, big fleshy tomatoes and lemon cucumbers with just a hint of yellow. I longed for dirt under my fingernails and to become one with nature.

I knew I’d need help, so I queried a neighbor for local tips. She was a gentle soul and generous with her knowledge. She told me how to amend the nitrogen poor soil with organic alfalfa meal, how to make compost from kitchen scraps and how to prune a Gravenstein apple tree.

One day, when I complimented the numerous whirligigs that adorned every inch of her property, her calm demeanor changed. Her eyes darted from side to side under her wide brimmed straw hat.

“They come in the night,” she whispered and clenched at her long teal gossamer skirt.

“Excuse me?” I could barely hear her above the squeaking and spinning of the yard ornaments. “Who comes in the night?”

“Here, take this.” She pulled a decorative fabric car stuck on a long metal stake from the ground. Its wheels were a rainbow of ribbons twirling in the wind. “You’ll need about a hundred more, but really, it’s hopeless.”

She picked up her pink and white striped gardening gloves and hurried away.

A few days later I was weeding next to our fence when I heard her on the other side.

“They come in the night.”

“Who does?” I asked the fence. “Who comes in the night? Zombies? Vampires? The Styrofoam police?”

“They’ll take everything,” the voice continued. “They have powers.”

“Powers?” I replied. Fear crept up my spine.

“They’re like ninja,” she continued. “Ann, Sebastopol has ninja gophers.”

“No!” I imagined tiny voles wrapped in black, wielding long curved swords silently rappelling down my retaining wall. “But what can I do? How can I fight such a foe?”

“You have to kill them. With traps.”

I heard pine needles crunch and she was gone.

What? Kill another creature? I became nauseous at the very thought. I didn’t have it in me. I felt bad enough digging up the weeds. I caught spiders in the bathroom and set them free outside. I can’t kill something, it’s against my nature. For gosh sakes, I grew up in Los Angeles!

I looked around the yard and sighed. Soon it would be a mound of dirt. Me and my wimpy suburban heart, we’d been defeated before we’d even begun. 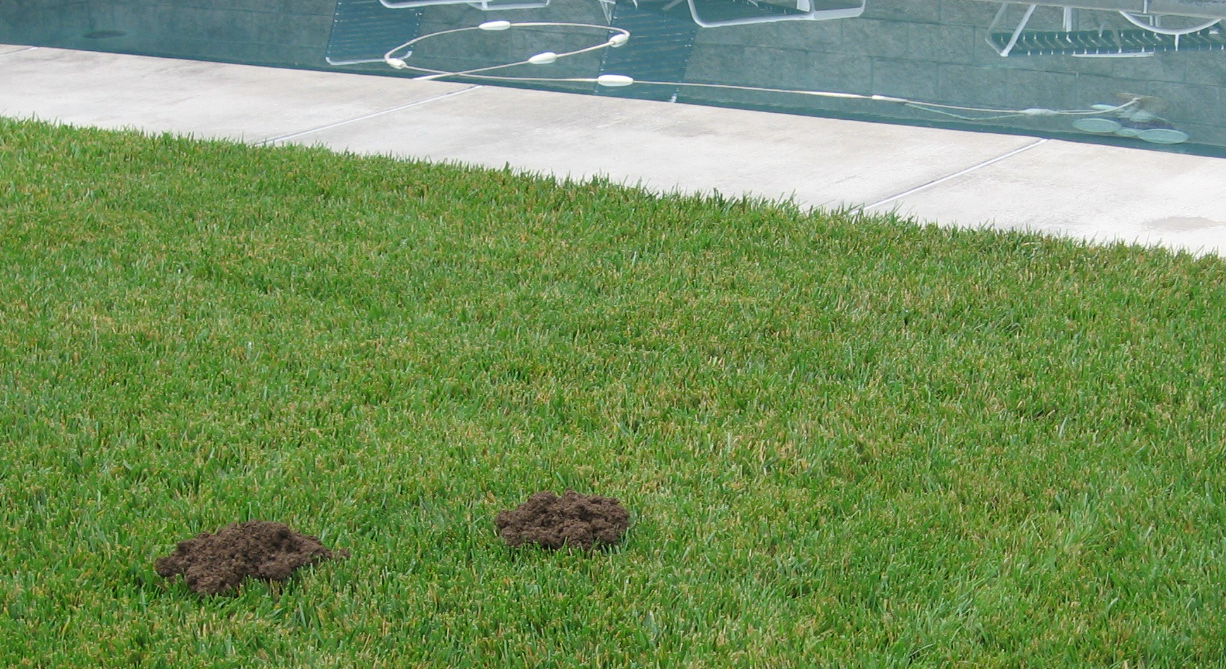 Then a few weeks ago I spotted them. There in the middle of the lawn were fresh mounds of dirt. The dreaded Sebastopol ninja gopher had found me. I dove behind the sofa and peeked around the corner.

My cat stuck his nose in my face.

“Sic ‘em!” I told my indoor kitty. He sniffed my hair and yawned.

I thought of Bill Murray in Caddyshack. Should I try a hose hooked to the fire hydrant? Maybe a stick of dynamite? Wasn’t the gopher the only one left standing in that movie?

Then I thought of the traps. No, I couldn’t do it. I’d just have to stay behind the sofa and let the gophers dig up the yard. It wouldn’t matter, by Tuesday they’d undermine the foundation and the house would be gone, too.

My cat got down on its haunches, wiggled and pounced on a puff ball. Then it dawned on me. My cat! I was living with a feline predator.

I ran to the cat box and looked down at the biodegradable cat litter made of newspaper. I held my breath and dug out pile of urine soaked pellets and placed them in a plastic bag.

Donning knee-high rubber boots, elbow-length rose pruning gloves and my sun hat I slowly approached the dirt mounds and listened. I expected a fur ball to fly through the air, with its hairless feet ready to impale me. But I heard nothing.

I quickly dug into the mound down to the tunnel, poured in the cat litter, covered it over and softly tamped it down. Would this work? Would my efforts be as flimsy as my fabric car whirligig? Or would I have to succumb and become a killer?

A week has passed now and there are no new dirt mounds in our lawn, my artichokes are still above ground and my peppers are thriving.

I know they’re out there.

Waiting to come in the night.

This entry was posted in Gardening and tagged Gardening, gophers, humor. Bookmark the permalink.

21 Responses to The Sebastopol Ninjas